The polar bear stands in the way of US plans to start sell-off of oil and gas drilling rights in Alaska. 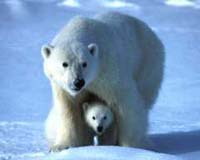 America is going to sell several million hectares of polar bear habitat in the Chukchi Sea in Alaska for oil and gas exploration leases. If done, it will make the polar bears' habitat vulnerable and risk the government's ability to protect it.

On January 9, 2007, the Fish and Wildlife Service formally proposed to list the polar bear as a threatened species. A final decision was due on January 9, 2008, but has been delayed (considering the reasons named earlier). It is expected to be completed in early 2008. The proposed listing did not include a proposal to designate critical habitat areas for the polar bear, thus the final rule will necessarily forgo critical habitat as well. The Center for Biological Diversity has announced it will continue litigation to obtain critical habitat and to seek endangered status which provides more protection than threatened status.

In spite of warnings the US government insisted that the sale of drilling rights does not threaten polar bears and that’s why it’s pretty sure to go ahead with the sell-off before a decision is taken on the polar bear's fate.