By Anastasia Tomazhenkova: Indonesian Health Ministry announced that a young woman died of bird flu Saturday, bringing the country's death toll from the disease to 103. 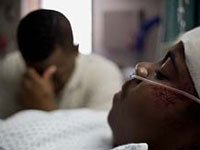 The housewife from Tangerang town in the western outskirts of Jakarta, died Saturday at a hospital in the city.

The woman was first hospitalized on Jan. 28, six days after she developed symptoms, including fever, cough and respiratory problems.

She was then moved to Persahabatan Hospital in eastern Jakarta on Jan. 29.

The woman had visited her parents, whose neighbors kept chickens. It was not clear whether the chickens were infected.

"Her death raised the Indonesian death toll to 103 out of 126 cases," said Sumardi, a ministry spokesman.

A 38-year-old woman from Kali Deres, the Jakarta neighborhood closest to Tangerang, has also been confirmed as being infected with bird flu and was being treated at Persahabatan Hospital.

Scientists have warned that Indonesia, which has millions of backyard chickens and poor medical facilities, is a potential hot spot for a global bird flu pandemic.

Infected birds pass on H5N1 ("bird flu") through their saliva, nasal secretions, and faeces. Other birds may pick up the virus through direct contact with these excretions or when they have contact with surfaces contaminated with this material. Because migratory birds are among the carriers of the H5N1 virus it may spread to all parts of the world. Past outbreaks of avian flu have often originated in crowded conditions in southeast and east Asia, where humans, pigs, and poultry live in close quarters. In these conditions a virus is more likely to mutate into a form that more easily infects humans. A few isolated cases of suspected human to human transmission exist, with the latest such case in June 2006 (among members of a family in Sumatra). No pandemic strain of H5N1 has yet been found.