By Anastasia Tomazhenkova: The mayor of the 8th district of Paris claimed that French President Nicolas Sarkozy, 53, married Italian singer and ex-model Carla Bruni, 40. They got married in the presence of close family and friends in the strictest of intimacy at the Elysee presidential palace in Paris on Saturday. 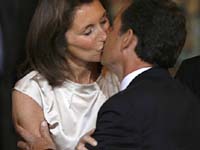 Sarkozy and Bruni, a singer and former model, reportedly met in November, soon after his divorce from his second wife Cecilia, in October. The pair went public with their relationship during a visit to Disneyland Paris, and they remained in the spotlight during trips to Egypt and Jordan.

Sarkozy's openness about his private life has surprised many French who are accustomed to presidents who are private about their partners. The president told a press conference last month that his relationship with Bruni was serious and all but confirmed that he planned to marry her.

The wedding lasted about 20 minutes and was attended by close family and friends, said Francois Lebel, the mayor of Paris's 8th district, who oversaw the formalities this morning.

"The bride was in white, she was thrilling as usual, but the groom wasn't bad either,'' Lebel said. "It's the first time in the history of the republic that a president has married in office.''

Sarkozy's marriage comes amid a drop in popularity, in part as the French say their president publicizes his private life too much. His approval rating fell 8 points to 41 percent in a Jan. 31 TNS-Sofres poll, below his "disapproval'' rating for the first time since he took office in May.

"There were about 20 people, the close family and some friends,'' Lebel said. "I wished them a lot of happiness.''