By Anastasia Tomazhenkova: Dolly, a female sheep, was the first mammal to be cloned from an adult somatic cell, using the process of nuclear transfer.Dolly has lived and died, but discussions about her creation rumbles on. 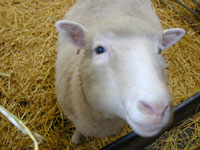 A government office received a petition demanding one of the scientists involved in the project be stripped of his knighthood.

The petition, initiated by molecular biologist Prim Singh, contends that professor Ian Wilmut "may have conspired with others to obtain advantage and honor to which he is not entitled," according to a report in Times Higher Education. The petition reportedly was addressed to Queen Elizabeth II.

"It was referred to us from the palace, and we will get back to the author in due course," said a spokeswoman at the Cabinet Office, who spoke anonymously in line with government policy.

The Cabinet Office coordinates the award of knighthoods and lesser honors to distinguished citizens.

Dolly was created at the Roslin Institute in Edinburgh and born in 1997. Dolly died in 2003.

After cloning was successfully demonstrated by Dolly's creators, many other large mammals have been cloned, including horses and bulls. Cloning is now considered a promising tool for preserving endangered species. Most animal conservation professionals point out that cloning does not alleviate the problems of loss of genetic diversity and habitat, and so must be considered an experimental technology for the time being, and all in all would only rarely be worth the cost, which on a per-individual basis far exceeds conventional techniques such as captive breeding or embryo transfer.

The petition was also signed by three other former employees of the Roslin Institute: Jeremy Brown, now at the Children's Hospital Oakland Research Institute in California; Pauline Ward, a former bioinformatician at Roslin; and Douglas Currie, now managing director of Roslin Nutrition.

Singh, who now works at the Borstel Institute in Liebniz, Germany, won an unfair dismissal case against the institute in 2006. But his allegations against Wilmut, including a charge of racial discrimination, were all dismissed.

Wilmut reportedly testified at the tribunal that a colleague, Keith Campbell, deserved 66 percent of the credit for Dolly.

Times Higher Education quoted Singh as saying Wilmut had "admitted he isn't the brains behind Dolly, and to then go on and award him a kinghthood reflects very badly on Scottish science."

Wilmut, currently the director of the Scottish Center for Regenerative Medicine at Edinburgh University, issued a statement saying the petition did not "accord with any of the evidence led at the employment tribunal and in relation to which a full judgment was issued," Times Higher Education reported.