By Anastasia Tomazhenkova: A passer-by found explosives packed into a beer barrel in the northern seaside town of Getxo. Basque police managed to deactivate the explosives. 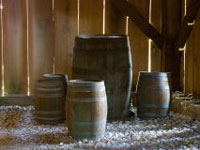 Police claimed that the barrel was spotted by a resident who alerted police.

The beer barrel was packed with about 35 kilograms (77 pounds) of explosives. The area was cordoned off.

Over the past few years, ETA has targeted Getxo on several occasions.

In December 2006, the group broke a cease-fire with a large car bombing at a Madrid airport parking garage, killing two people.

Euskadi Ta Askatasuna or ETA (Basque for "Basque Homeland and Freedom"), is an armed Basque nationalist separatist organization. Founded in 1959, it evolved from a group advocating traditional cultural ways to an armed group demanding Basque independence.

Since 1968 to date ETA has killed 821 people and committed dozens of kidnappings. ETA is proscribed as a terrorist organisation by both the Spanish and French authorities as well as the European Union as a whole, the United States, and the United Nations.