By Anastasia Tomazhenkova: Five men were arrested by Guyana police, two others were killed. Police suspected they were members of a gang that killed 11 people in a small coastal town last weekend. 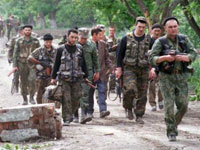 Last Saturday a group of gunmen burst into a coastal village Lusignan and killed 11 people. Five children were among the dead in Lusignan. Before the killings in Lusignan, the group attacked police headquarters in the capital, firing indiscriminately and wounding two guards.

Gary Best, Army Chief of Staff, claimed the men died during a gunfight with police and soldiers late Wednesday at Buxton Village, about a half mile from Lusignan.

Authorities have cornered about a dozen gang members in Buxton's thick jungles and plan to burn portions of it to uncover hiding places. The gang usually retreats there after committing armed robberies and clashing with rival gangs, Guyana Police Chief Henry Greene said.

Police confirmed that  the five men arrested were members of a gang led by Rondell Rawlins, who on Wednesday called a local newspaper and pledged more violence if his pregnant, 18-year-old girlfriend does not appear.

Rawlins, who had accused police of abducting Tenisha Morgan, said he organized the killings, according to the paper's top editors. Authorities say they do not have her, but Greene said police are pursuing three people suspected of kidnapping her.

Residents in Lusignan and neighboring towns have organized several protests over what they say is police failure to prevent violence. Authorities have made arrests and used tear gas on the crowds.