Epidemic of mysterious illness kills thousands of bats in US

By Margarita Snegireva. An epidemic of some strange illness spread among bats in northeastern U.S. and caused death of thousands of animals. New York state wildlife officials say that this may be fraught with extinction. 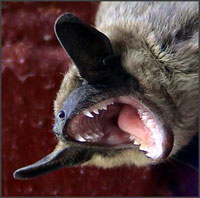 Epidemic of mysterious illness kills thousands of bats in US

At eight caves in New York and one in Vermont , scientists have seen bat populations plummet over two years. Most bats hibernate in the same cave every winter, keeping annual counts consistent. A cave that had 1,300 bats in January 2006 had 470 bats last year. It recently sheltered just 38.

At another cave, more than 90 percent of about 15,500 bats have died since 2005, and two-thirds that remain now sleep near the cave's entrance, where conditions are less hospitable. Scientists don't know what's causing the deaths, and biologists wearing sanitary clothing and respirators to prevent the spread of disease are collecting the dead for testing as part of a state and U.S. effort.

Only 0.5% of bats carry rabies. However, of the very few cases of rabies reported in the United States every year, most are caused by bat bites. Although most bats do not have rabies, those that do may be clumsy, disoriented, and unable to fly, which makes it more likely that they will come into contact with humans. Although one should not have an unreasonable fear of bats, one should avoid handling them or having them in one's living space, as with any wild animal.

Due to the risk of rabies and also due to health problems related to their faecal droppings (guano), bats should be excluded from inhabited parts of houses. For full detailed information on all aspects of bat management, including how to capture a bat, what to do in case of exposure, and how to bat-proof a house humanely, see the Center for Disease Control's website on bats and rabies. In certain countries, such as the United Kingdom, it is illegal to handle bats without a license.

Where rabies is not endemic, as throughout most of Western Europe, small bats can be considered harmless. Larger bats can give a nasty bite. They should be treated with the respect due to any wild animal