Russia said the EU should be allowed by the U.N. Security Council to replace a U.N. mission in Kosovo. 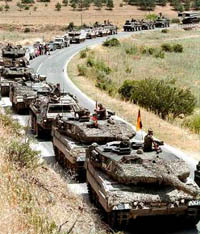 "We hope that the U.N. secretary-general and our others partners will realize the perilous consequences of unilateral steps and actions which violate the U.N. Charter, and refrain from steps fraught with disastrous consequences for the system of international relations," Kamynin said in a statement.

After many weeks of discussions at the UN, the United States, United Kingdom and other European members of the Security Council formally 'discarded' a draft resolution backing Ahtisaari's proposal on 20 July 2007, having failed to secure Russian backing. Beginning in August, a "Troika" consisting of negotiators from the European Union (Wolfgang Ischinger), the United States (Frank Wisner) and Russia (Alexander Botsan-Kharchenko) launched a new effort to reach a status outcome acceptable to both Belgrade and Pristina. Despite Russian disapproval, the U.S., Britain, and France appear likely to recognize Kosovar independence if it is declared after December 10, 2007, the date upon which the Contact Group will report on the Troika's efforts to UN Secretary General Ban Ki-moon