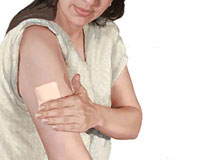 Daines, a physician, is challenging what he believes is a "misguided federal policy that limits smokers' access to safe nicotine-replacement therapy," he said in announcing the action. New York is the first state to petition the FDA on the matter, and any change to that agency's policy would have national implications.

"Under the current system, a smoker generally cannot buy safe nicotine in the same store where cigarettes are sold and, even though most smokers buy cigarettes one day at a time, those who purchase safe nicotine must buy a one- or two-week supply costing $20 to $40," he said in a statement.

Nicotine replacement therapy (NRT) is the use of various forms of nicotine delivery methods intended to replace nicotine obtained from smoking or other tobacco usage. These products are intended for use in smoking cessation efforts to help deal with withdrawal symptoms and cravings caused by the loss of nicotine from cigarettes. Several forms of NRT have been marketed, including the nicotine patch, inhaler, nasal spray, gum, sublingual tablet, and lozenge. NRT is thought to be useful and beneficial for tobacco users who want to quit their addiction and is for most people perfectly safe. Cigarettes on the other hand cause the early deaths of about 5 million people each year. These people are not killed by the nicotine in the cigarette, but by other constituents of tobacco smoke such as Carbon Monoxide and tars. It is the nicotine that keeps the smoker addicted. Cigarettes can be viewed as a "dirty" and dangerous method of delivering nicotine, while NRT is a "clean" and safe method.

NRT delivers nicotine to the smokers brain in a much slower way than cigarettes do. It helps to damp down the urges to smoke that most smokers have in the early days and weeks after quitting, rather than remove them totally. It gives the smoker the chance to break smoking cues in their daily lives, and might provide a more comfortable exit from the smoking habit. NRT however is best used with some form of support, ideally from someone who knows something about smoking cessation.