By Margarita Snegireva. The ABC channel reported that it will air an episode of its new drama “Eli Stone” in spite of the fact that U.S. pediatricians say this show may discourage parents from having their children immunized. 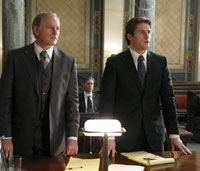 The debut episode features the show's title character and hero, a trial lawyer for big corporations who decides to fight for the little guy, convincing a jury that a mercury-based preservative in a vaccine caused a child's autism.

On the show, a jury awards the boy's mother $5.2 million in damages after it is revealed the CEO of the vaccine maker kept his own daughter from getting the company's vaccine because of autism concerns.

"Eli Stone" is an upcoming American television drama created by Greg Berlanti and Marc Guggenheim, who also serve as executive producers alongside Ken Olin who directed the pilot, with Melissa Berman producing .

Produced by ABC Studios, After Portsmouth and Berlanti Television, the series was officially greenlit and given a thirteen-episode order on May 11, 2007, and is currently scheduled to air as a mid-season replacement in 2008. It will also air on Channel Seven in Australia, CTV in Canada, and Antena 3 in Spain. Eli Stone will begin airing on Thursday January 31, 2008 at 10/9c following the highly anticipated return of Lost.

Co-written by Marc Guggenheim and Greg Berlanti, the series was described by Berlanti in Variety magazine as "a Field of Dreams-type drama set in a law firm where a thirty-something attorney begins having larger-than-life visions that compel him to do out-of-the-ordinary things."

Pop Star George Michael will also appear on the show and each episode will be named after a song of his.