By Anastasia Tomazhenkova: India's health minister Anbumani Ramadoss resumed the debates about smoking, he called on the country's biggest movie stars to stop smoking on screen. 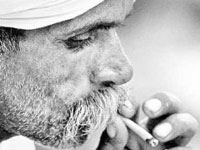 Even as an increasing number of countries clamp down on that bad habit, the Hindu freely smoke in playgrounds, railway stations, sidewalk cafes and even hospitals, a situation that Health Minister has long sought to change.

He has helped enact a number of laws banning smoking in various public places - most of them routinely ignored - and on Sunday he urged Bollywood stars to stub out their smokes on screen.

"We have statistics which show that 52 percent of children have their first puff because of movie celebrities," Ramadoss told CNN-IBN news channel in an interview.

He cited by name arguably the country's two biggest male stars - Amitabh Bachchan, universally known as the Big B, and Shah Rukh Khan, whom nearly everyone calls King Khan.

Bachchan has brushed off such suggestions in the past, and Khan was having none of it on Monday.

"I think there is a huge amount of creative freedom that should be allowed in cinema and the arts," he told the news channel.

Known to be a smoker - he's been spotted lighting up at cricket matches and elsewhere - Khan said he agreed that "one should try and quit smoking."

But, he added that smoking in the movies is "make believe ... we must not have too much censorship on that."

About 250 million people use tobacco in India. Smoking and chewing tobacco kills more than 900,000 people every year, according to the Health Ministry.

But the disagreement between the actor and the government minister is one of the first public debates on the subject.

A recent government effort to introduce pictorial warnings, recommended by the World Health Organization, has run into legal delays with tobacco companies fighting to keep them off boxes.

Since the era of silent films, smoking has had a major part in film symbolism. Since World War II, smoking has gradually become less frequent on screen as the obvious health hazards of smoking have become more widely known. With the anti-smoking movement gaining greater respect and influence, conscious attempts not to show smoking on screen are now undertaken in order to avoid encouraging smoking or giving it positive associations, particularly for family films. Smoking on screen is more common today among characters who are portrayed as anti-social or even criminal.