By Anastasia Tomazhenkova: The president of Guyana reported a group of gunmen burst into a coastal village Lusignan early morning and killed 11 people, he blamed on a gang leader who has threatened widespread attacks. 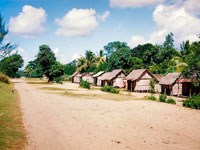 Before the killings in Lusignan, the group attacked police headquarters in the capital, firing indiscriminately and wounding two guards.

Five children were among the dead in Lusignan, 11 kilometers (seven miles) east of Georgetown, the capital.

President Bharrat Jagdeo, as he prepared for meetings with security officials and the military, claimed that human could not commit that crime, only bloodthirsty animals. He said he would go to the village to meet with grieving relatives later in the day.

About 300 people in the neighboring town of Mon Repos set tires, old refrigerators and oil drums on fire and blocked the two main roads through their village and into Lusignan.

"We want justice!" they cried. "Government can't protect us! We want more police!"

The group, made up mostly of men, vowed to form vigilante groups and avenge the killings.

Mon Repos is usually a bustling marketplace on Saturdays, but everything was closed as irate villagers yelled at soldiers that began to arrive.

"It is unthinkable that gunmen will break into your house with your family, put everyone to sit in a chair and kill them," said 50-year-old Karamchand Sukhu.

Police have not said whether the victims were relatives or if they were found sitting in chairs.

On Wednesday night, suspected gang members killed a Guyanese soldier during a gunbattle in Buxton, a village three kilometers (two miles) from Lusignan.

Police and government officials say they suspect a gang led by Rondell Rawlins, a former Guyanese soldier, is behind the violence. Rawlins has accused security forces of kidnapping his pregnant 18-year-old girlfriend days ago and police say he threatened to carry out attacks until she is found. Police said they are probing the woman's disappearance.

Rawlins is accused of being a crime boss since 2002, and blame him for the April 2006 slaying of Agriculture Minister Satyadeo Sawh - a murder that authorities said was aimed at destabilizing this former Dutch and British colony.