Voters in Alabama's two coastal counties will go to the polls ahead of those in other states picking presidential favorites on Super Tuesday. 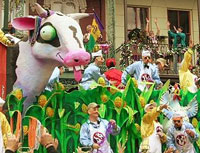 That's because the Feb. 5 vote is on Fat Tuesday and the throngs celebrating Mardi Gras on the Gulf coast may not be overly interested in going to a polling place.

Mardi Gras is the day before Ash Wednesday, and is also called "Shrove Tuesday" or "Pancake Day". Mardi Gras is the final day of Carnival, though the term is often used incorrectly to describe the days and weeks preceding Fat Tuesday.

Carnival begins 12 days after Christmas, or Twelfth Night, on January 6 and ends on Mardi Gras, which always falls exactly 46 days before Easter. Mardi Gras Day can therefore fall on any Tuesday between February 3 and March 9. Perhaps the cities most famous for their Mardi Gras celebrations include New Orleans, Louisiana; Venice, Italy; Mobile, Alabama; and Rio de Janeiro, Brazil.

Many other places have important Mardi Gras celebrations as well. Carnival is an important celebration in most of Europe, except in the United Kingdom where pancakes are the tradition, and also in many parts of Latin America and the Caribbean.