The CEO of Enterprise Engineering, a privately held software and information technology consulting company, is accused of a hit-and-run crash entailing the death of a 59-year-old woman on Thursday evening. 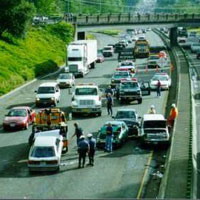 The police reported that George W. Anderson was driving a black Mercedes-Benz sport-utility vehicle north on Water Street, between Hanover Square and Old Slip, at 10:51 p.m. Thursday when he ran over the woman. The victim was identified as Florence Cioffi, of Gerritsen Beach, Brooklyn. She died at hospital.

The woman was a secretary for Frenkel & Company in the south tower of the World Trade Center when it was attacked on Sept. 11, 2001, later on worked as an insurance brokerage at the company’s office in Jersey City. She was allegedly heading for home after dinner with her friends in a restaurant.

The police reported that Mr. Anderson left the scene of the accident but returned in five minutes. He refused to submit to a Breathalyzer test to determine if he had been drinking. He also lied to the police about his work, pretending to be a computer programmer. He is now in custody and awaits the sentence.