By Anastasia Tomazhenkova: A collector from Saudi Arabia was to receive the stolen paintings by Pablo Picasso and Candido Portinari. A suspect in last month's shameless theft of the paintings told detectives about that fact. 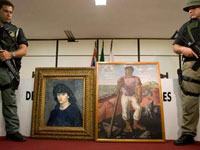 Former TV chef Moises Manoel de Lima Sobrinho, the suspect provided the information after he turned himself in Thursday, but a public safety department spokeswoman said she did not know whether Lima Sobrinho named the collector. She declined to be identified in keeping with department policy

Lima Sobrinho, who briefly hosted a cooking show on a local TV channel, can provide information needed to catch those who ordered the theft, police said.

Picasso's "Portrait of Suzanne Bloch" and "O Lavrador de Cafe" by Portinari, an influential Brazilian artist, were stolen on Dec. 20 from the Sao Paulo Museum of Art by three men who used a crow bar and car jack to force open one of the museum's steel doors.

The framed paintings were found on Jan 8., covered in plastic and leaning against a wall in a house on the outskirts of Sao Paulo, South America's largest city

Two other suspects are in custody, one of them an escaped convict. Still at large are the owner of the house where the paintings were found and the person or persons who ordered the heist.