By Alex Steblinina. China’s state media reported Friday that the former head of the country’s second largest oil company, Sinopec Corp., had been expelled from the Communist Party and referred to prosecutors. 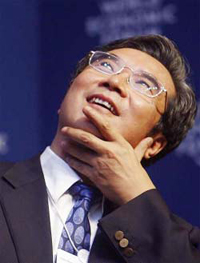 He is charged with corruption, the AP reports.

State broadcaster CCTV reported that Chen Tonghai had violated the party discipline and was suspected of making crimes. Besides he was accused of taking bribes.

For example, many chief executive officers of Western companies tend to have favorable impressions of the CPC while many revolutionary Maoists and other Marxists have strongly negative opinions.

Some of the opponents of the Party within the Chinese democracy movement have tended not to argue that a strong Chinese state is inherently bad, but rather that the Communist leadership is corrupt. The Chinese New Left, meanwhile, is a current within China that seeks to "revert China to the socialist road" – i.e., to return China to the days after Mao Zedong but before the reforms of Deng Xiaoping and his successors.