By Margarita Snegireva. The whole world was saddned to hear the news that 28-year-old Heath Ledger died. 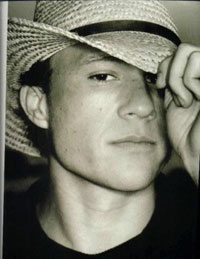 Heath Ledger was well-known for his role as a gay cowboy in Brokeback Mountain . News reports have revealed that Heath took the prescription sleep aid Ambien to help him sleep along with anti-anxiety medications. Heath Ledger was found dead on Tuesday, January 22, by his housekeeper and masseuse. He was lying naked, face down at the foot of his bed according to police

Zolpidem (sold under the trade name Ambien) is a prescription medication used for the short-term treatment of insomnia, as well as some brain disorders. It is a short-acting nonbenzodiazepine hypnotic that potentiates gamma-aminobutyric acid (GABA), an inhibitory neurotransmitter, by binding to benzodiazepine receptors which are located on the gamma-aminobutyric acid receptors. It works quickly (usually within 15 minutes) and has a short half-life (2–3 hours). Some trade names of zolpidem are Ambien, Stilnox, Stilnoct, Hypnogen, Zolt, Zolfresh, Nimadorm, Sanval, and Myslee. Its hypnotic effects are similar to those of the benzodiazepine class of drugs, but it is molecularly distinct from the classical benzodiazepine molecule and is actually classified as an imidazopyridine. Flumazenil, a benzodiazepine receptor antagonist, which is used for benzodiazepine overdose, can also reverse zolpidem's sedative/hypnotic effects.

Alcohol has cross tolerance with GABAa receptor positive modulators such as the benzodiazepines and the nonbenzodiazepine drugs. For this reason alcoholics or recovering alcoholics may be at increased risk of physical dependency on zolpidem. Also, alcoholics and drug abusers may be at increased risk of abusing and or becoming psychologically dependent on zolpidem. Zolpidem should be avoided in those with a history of Alcoholism, drug misuse (illicit or prescription misuse), or in those with history of physical dependency or psychological dependency on sedative-hypnotic drugs.