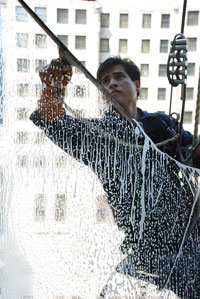 Mr. Moreno thanked about 15 doctors, nurses and specialists who had gathered to see him off as he left.

Mr. Moreno plunged to the ground when his window washer’s platform gave way near the top of an Upper East Side apartment house on Dec. 7. His brother Edgar, 30, was working with him and died when the 16-foot-wide scaffold slammed into an alley beside the building, at 265 East 66th Street , near Second Avenue .

But Mr. Moreno lived. Minutes after the plunge, he was sitting up. The trauma team that was mobilized to treat him at NewYork-Presbyterian found that he had serious injuries to his brain, his chest and his abdomen, as well as several fractured ribs and a broken arm. Both legs were also broken.

In his six weeks in the hospital, Mr. Moreno underwent 16 operations, including 10 orthopedic operations in the first 3 weeks. The doctors performed one operation, to open his abdomen, in the emergency room soon after he was brought in. They did not want to take a chance on jostling him by wheeling him to a conventional operating room, or waste the time.