By Anastasia Tomazhenkova: Police officers were joking about a dying, homeless Guatemalan immigrant Rene Perez after he was found on the side of a deserted road in their suburban town. Their mockery was taped and broadcasted. 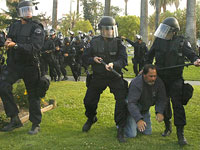 The two go on to marvel - with the officer chuckling - that Rene Perez had apparently revived himself temporarily after authorities thought him dead on April 28, 2007. Perez died an hour after the officers' taped exchange.

The immigrant had had a series of encounters with police in Bedford and neighboring Mount Kisco that night. A Mount Kisco police officer has pleaded not guilty to manslaughter charges in Perez's death.

Prosecutors say the officer drove the drunken Perez to Mount Kisco, dealt him a deadly blow to the abdomen and left him to die.

In a later phone call to another Bedford sergeant, after Perez' death, a Bedford officer sings the title line from the 1966 hit record "Walk Away Renee" by The Left Banke.

Chris Menzel, Bedford Police Chief, defended the department. "We are not callous or indifferent," he said.

A lawyer for the Mount Kisco officer charged in the case, George Bubaris, did not immediately return a telephone call late Thursday. The lawyer, Edward Hayes, has subpoenaed all Bedford police records about Perez. Prosecutors have called the subpoenas improper and are trying to quash them; a hearing is set for next week.

Perez, 42, an illegal immigrant, had a history of making drunken calls to the police emergency dispatcher. He called Mount Kisco police complaining of stomach pain on April 28, and police records show Bubaris reported there was no need for further action.

Lawsuits filed on behalf of Perez' family maintain that Mount Kisco and Bedford made a practice of "dumping" each other's undesirables in the neighboring town. Bedford police had taken Perez into Mount Kisco hours before Bubaris allegedly took him to Bedford.

Bubaris, who said he is engaged to a woman of Puerto Rican heritage, has said he is deeply troubled by implications that he was racially insensitive

The friction created by large influxes of immigrants moving into Westchester County, north of New York CIty, has led to recent court cases alleging police bias against immigrant day laborers and voting rights violations against Hispanics. Several municipal officials have expressed frustration with the failure of the U.S. Congress to come up with a national policy to deal with illegal immigration.