By Anastasia Tomazhenkova: Romanian broadcasting authorities are very displeased. A grim humorous cartoon showing squirrels hanging themselves and throwing themselves in front of cars is on-screen. 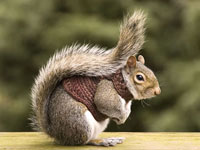 The cartoon is broadcast on a channel with a British license. And Romanian authorities have no control over it.

The Romanian regulatory body for television broadcasting will make an official protest to the European Commission about the one-minute cartoon shown every afternoon on the British-licensed channel AXN.

The cartoon, called "Suicidal Squirrels," is also broadcast on cable television in Poland, the Czech Republic, Slovakia, Hungary, and Moldova.

The National Audiovisual Council disagreed that the cartoon was damaging for children to watch.

AXN declined to reach an agreement with Romanian regulators.

"Some people may say this is an overreaction, but I don't think that such programs would be broadcast in Britain at two in the afternoon," said Gelu Trandafir, a member of the broadcasting council.

AXN, which is seen on cable television, obtained its license from Britain and therefore is governed by British broadcasting rules.