U.S. President Bush allowed the Navy to disregard an environmental law which protects sea mammals from sonar equipment used during military exercises off the Californian coast. 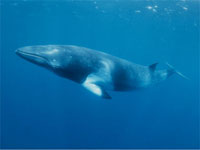 Scientists all over the world have been fighting against the use of sonar devices because they cause considerable damage to the natural world. Mid-frequency sonar can disorient and even kill whales. The U.S. administration does not seem to care much about sea mammals. Bush stated that naval exercises were highly important to the national security.

Bush said in his memorandum to the Defense Department that that the military training conducted by the U.S. Navy with the use of mi-frequency sonar was “in the paramount interest of the United States.”

The decision therefore allows the U.S. Navy to disregard injunction of a U.S. District Court in California which stipulates special requirements while operating sonar devices during naval exercises.

Animal groups across the nation have already expressed their serious concerns in connection with Bush’s decision. “"There is absolutely no justification for this," said California Coastal Commissioner Sara Wan. "Both the court and the Coastal Commission have said that the Navy can carry out its mission as well as protect the whales. This is a slap in the face to Californians who care about the oceans," she added.

There is evidence that very loud noise from anti-submarine warfare sonar may hurt whales and lead to their beaching. On numerous occasions whales have been stranded shortly after military sonar was active in the area, suggesting a link. Reasons as to how sonar may cause whale deaths have also been put forward by scientists after necropsies found internal injuries in stranded whales. In contrast, whales stranded due to seemingly natural causes are usually healthy prior to beaching.

Firstly, it has been argued that the very loud rapid pressure changes made by sonar can cause haemorrhaging. Evidence emerged after the beachings of seventeen whales and a dolphin in the Bahamas in March 2000 following a United States Navy sonar exercise. The Navy accepted blame in this Joint Interim Report which found the dead whales to have experienced acoustically-induced haemorrhages around the ears. The resulting disorientation probably led to the stranding. Ken Balcomb, a zoologist, specializing in the study of whales, particularly the Orca populations that inhabit the Strait of Juan de Fuca between Washington and Vancouver Island, has studied mass beachings of whales.He investigated the March 2000 beachings and argues that the powerful sonar pulses had used vibrations that resonated with airspaces in the whales, causing tearing of tissue around the ears and brain.

Another means by which sonar could be hurting whales is a form of decompression sickness. This was first raised by pathological examinations after 14 beaked whales stranded in the Canary Islands. The stranding happened on 24 September 2002, close to the operating area of Neo Tapon (an international naval exercise) about 4 hours after the activation of mid-frequency sonar.[8] The team of scientists found acute tissue damage from gas-bubble lesions, which are indicative of decompressions sickness. The precise mechanism of how sonar causes bubble formation is not fully known. It could be due to whales panicking and surfacing too rapidly in an attempt to escape the sonar pulses. There is also a theoretical basis by which sonar vibrations can cause supersaturated gas to nucleate to form bubbles