Dennis Kucinich can be excluded from candidate debate 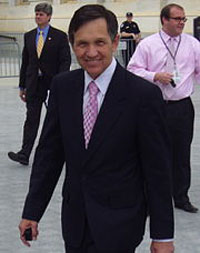 Dennis Kucinich can be excluded from candidate debate

Lawyers for NBC Universal Inc., had asked the high court to overturn a lower court order that the cable TV news network include the Ohio congressman or pull the plug on broadcasting the debate Tuesday night with Hillary Rodham Clinton, Barack Obama and John Edwards, the AP reports.

Dennis John Kucinich is a Democratic American politician and a candidate for the Democratic nomination for President of the United States in 2004 and 2008.

Kucinich currently represents the 10th District of Ohio in the United States House of Representatives. His district includes most of western Cleveland, as well as such suburbs as Parma and Cuyahoga Heights. He is currently the chairman of the Domestic Policy Subcommittee of the House Committee on Oversight and Government Reform. He is also a member of the Education and Labor Committee.

From 1977 to 1979, Kucinich served as the 53rd mayor of Cleveland, Ohio, a tumultuous term in which he survived a recall election and was successful in a battle against selling the municipal electric utility before being defeated for reelection by George Voinovich.

Kucinich has always been easily reelected to Congress, though Republicans and conservative Democrats have made increasingly high-profile attempts to challenge him. In the 2004 primary election, Kucinich was renominated for the seat representing Ohio's 10th congressional district.

In 2006, Kucinich defeated another Democratic primary challenger by a wide margin, and defeated Republican Mike Dovilla in the general election with 66% of the vote, despite last-minute Republican attempts to bring more support to Dovilla.

Kucinich will run again for Congress in 2008 if his bid for President is unsuccessful.