By Margarita Snegireva. The state of Illinois is now smoke free and ever since the law went into effect businesses and customers are watching for violators. 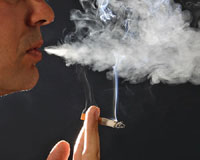 In the USA, smokers and hospitality businesses initially argued that businesses would suffer from smoking bans. Some restaurateurs argued that smoking bans would increase the rate of dine and dashes where patrons declare they are stepping outside to smoke, while their intent is to leave. Others have countered that even if this occurred it could decrease the leisure (non-eating) time spent in the restaurants, resulting in increased turn-over of tables, which could actually benefit total sales. The experiences of Delaware, New York, California, and Florida have shown that businesses are generally not hurt, and that many hospitality businesses actually show increased revenues. According to the 2004 Zagat Survey, which polled nearly 30,000 New York City restaurant patrons, respondents said by a margin of almost 6 to 1 that they eat out more often now because of the city's smoke-free policy. A 2006 U.S. Surgeon General review of studies suggests that business may actually improve. Thus, research generally indicates that business incomes are stable (or even improved) after smoking bans are enacted, and many customers appreciate the improved air quality.