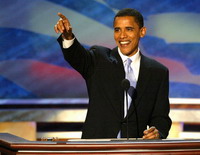 Sen. John Kerry the Democrats’ nominee who lost the election to Bush is going to express his support for Barack Obama at a college rally.

He will argue that Obama is the best candidate to unite the country and has the potential to create transformational change.

Obama won the January 3, 2008 Iowa Democratic caucuses with 38% support, ahead of 30% for John Edwards and 29% for Hillary Clinton. Although polls and pundits alike predicted a definitive victory by as much as 13 percentage points in the January 8, 2008 New Hampshire primary, Obama came in second with 36% of the vote to Hillary Rodham Clinton's 39% and John Edwards' 17%.