By Anastasia Tomazhenkova: A British student was slain in the central Italian city of Perugia in November. A judge has allowed to examine the computers of an American and an Italian suspect in the slaying. 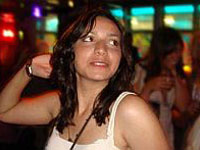 The judge has also decided that experts could examine the computer of the victim, Meredith Kercher. A hearing to appoint the experts will be held on Jan. 21.

An American, Raffaele Sollecito, has been jailed for over two months along with his American girlfriend at the time, Amanda Marie Knox of Seattle, in connection with the slaying of the 21-year-old Kercher.

Kercher, a student from Leeds University in England and enrolled for a year of study in Perugia, was murdered on the evening of 1 November 2007. She was found dead Nov. 2 in the apartment she shared with Knox. She died from a stab wound to the neck, and prosecutors said she was killed resisting a sexual assault.

Police have said Kercher's throat was slit with a shard of glass or a pen-knife, but have not yet located the murder weapon. Police initially believed that the killer or killers escaped through a broken window in Kercher's room, since the door was locked when they arrived, but now suspect the break-in was staged

Knox, 20, and Sollecito, 23, were jailed Nov. 6 and a judge has ruled that both can be held for as long as a year while the investigation continues. They have not been formally charged, but the judge said there was sufficient evidence to keep them in custody.

Sollecito has said he was at his own Perugia apartment the night of the slaying, working at his computer, but does not remember if Knox spent the whole night with him. Both suspects have given confused recollections and conflicting statements and said they had smoked hashish that night, according to court documents.

Sollecito's defense has said that analyses on his computer show he had been logged on. Prosecutors say police have proven that the computer was connected to the Internet but without anybody accessing it overnight.