Man insulted and overcharged in restaurant in Louisiana

By Anastasia Tomazhenkova: A 265-pound man was overcharged for his trips to the buffet in a restaurant in Louisiana, then he was also banned because he consumed much during his visits.

Man insulted and overcharged in restaurant in Louisiana

Ricky Labit, a 6-foot-3 (190 centimeter) disabled offshore worker, was a regular at the Manchuria Restaurant, eating there as often as three times a week. But on his most recent visit a waitress gave him and his wife's cousin, Michael Borrelli, a bill for $46.40 (Ђ31.60), roughly double the buffet price for two adults.

The two men felt discriminated against because of their size.

"I was stunned, that somebody would say something like that. 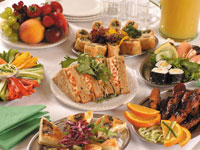 Man insulted and overcharged in restaurant in Louisiana
I ain't that fat, I only weigh 277," Borrelli said.

Accountant Thomas Campo, who spoke for the restaurant because the owner's English is limited, claimed the men were charged an extra $10 (Ђ6.81) each on Dec. 21 because they made a habit of dining exclusively on the more expensive seafood dishes, including crab legs and frog legs.

He also added that a lot of big people visited their restaurant and nobody discriminated them.

The argument over the bill grew heated, and police were called. The police report states that the disagreement was settled when the restaurant said the bill was a mistake and, to appease Labit, the meal was complimentary.

Labit said he insisted on paying but was told not to come back. He complained that when seafood on the buffet line runs out, the restaurant only grudgingly cooks more. Campo said the proprietress tries to reduce waste of quality food.