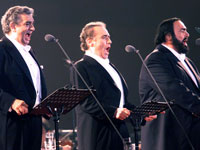 Jose Carreras, 61, is giving concerts at the Sydney Opera House in Australia.

"Reforming a trio with the surviving tenors would be disrespectful to Pavarotti. For Placido (Domingo) and myself to do something would betray the memory of Luciano; I don't think that would be ethical", he said.

Carreras was diagnosed with leukemia in 1987 but overcame the disease to take part in the hugely popular "Three Tenors" concerts from 1990.

Carreras traveled to Pavarotti's home in Modena, Italy, and called him often as he was dying.

"It was important to show him that someone who suffered from such a severe disease was able to overcome the situation and win the battle. This is the kind of comfort I could give him," said Carreras.

Luciano Pavarotti died in September of pancreatic cancer aged 71. Pavarotti was well known for his televised concerts and media appearances. Pavarotti was also noted for his charity work benefiting refugees, the Red Cross and other causes.