By Anastasia Tomazhenkova: Police officers were shocked when they found a teenager from Morocco hidden in the gas tank of a Mercedes car. 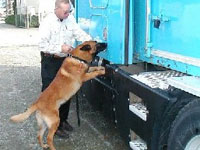 The attempt of a Moroccan boy to sneak in Spanish enclave in North Africa foiled.

Police arrested the boy and two Spaniards, who were also in the car, after police dogs sniffed cars at a border crossing at Ceuta.

The gas tank had been emptied and fitted with a door so the boy could crawl in from behind the rear seat. The car had a small, improvised container that held a small amount of gasoline.

Ceuta and another Spanish city, Melilla, are on Morocco's northern coast and many undocumented immigrants try to sneak into them in hopes of eventually reaching the Spanish mainland in search of a better life.

Civil Guard spokesman Alfonso Cruzado said he could tell "an infinity of anecdotes" about the extremes desperate people will go to to enter Ceuta, such as men stuffing themselves inside mattresses strapped on top of cars crossing into the city.

"Unfortunately, we see this ingenuity all over the place," he said by telephone from Ceuta.