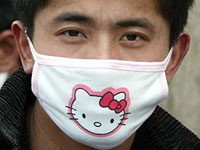 Hello Kitty is the best-known of many fictional characters produced by the Japanese company Sanrio. Hello Kitty was created in 1974 by the Sanrio Company of Japan in Tokyo, Japan. Registered in 1976, Hello Kitty is now a globally known trademark.

Although originally aimed at the pre-adolescent female market, the Hello Kitty logo now adorns products for all ages. Though a large proportion of the merchandise are stationery products, other goods range from foods and clothing to computers and cars and passenger jets, and in Japan, its popularity has penetrated every aspect of Japanese daily life.

In Japan, Hello Kitty is no longer viewed as merely for young girls, but is equally popular with teenagers and even adults who like the sweet, cute and girly image. This expanded market is reflected by the sale of Hello Kitty adult underwear and even vibrators. Hello Kitty items in the USA include luggage tags, posters, purses, cosmetics, stickers, and jewelry. In addition, there are many stores selling only Hello Kitty merchandise.

The company claimed that T-shirts, bags, watches and other products targeting young men will be soon on offer .

"We think Hello Kitty is accepted by young men as a design statement in fashion," company spokesman Kazuo Tohmatsu said.

The feline for-men products will go on sale in Japan next month, and will be sold soon in the U.S. and other Asian nations, according to Sanrio.

The usual bubble-headed shape of Hello Kitty was slightly changed for a more rugged, cool look to appeal to men in their teens and early 20s.

But Sanrio had tried a "limited edition" collaboration in men's clothing with designers in Tokyo's chic Harajuku section earlier this year, and they proved popular, he said.

"Young men these days grew up with character goods," said Tohmatsu. "That generation feels no embarrassment about wearing Hello Kitty."

Hello Kitty has been marketed in the US from the beginning and has held the position of U.S. children's ambassador for UNICEF since 1983. The brand rose to greater prominence during the late 1990s when several celebrities such as Mariah Carey adopted Hello Kitty as a fashion statement. New products featuring the character can be found in virtually any American department store and Hello Kitty was once featured in an advertising campaign of the retail chain Target.