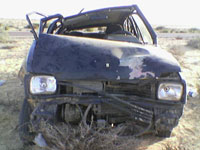 By Anastasia Tomazhenkova: Medical official reported that a Canadian woman was killed Friday in a car accident on Egypt's Sinai Peninsula.

The 26-year-old woman and a Jordanian man were on the way to Egypt's capital, Cairo, when their car overturned in Sadr el-Hitan, an area in central Sinai.

The woman died before the ambulance arrived at the site of the accident, and her companion was seriously wounded.

The names of the victims were not released, and the Canadian and Jordanian embassies in Cairo were closed because Friday is the weekend in Egypt.

Deadly road accidents are common in Egypt and tend to be blamed on poorly maintained vehicles, bad roads and a lack of respect for traffic regulations. Police estimate that at least 6,000 people are killed every year in car accidents.