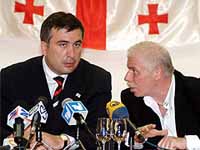 By Alexandra Steblinina. Georgian presidential candidate billionaire Badri Patarkatsishvili said that he had offered police a lot of money not to use force against protesters.

After the statement Georgian prosecutors accused him of conspiring to overthrow the government of President Mikhail Saakashvili.

Patarkatsishvili was planning mass demonstrations the day after the Jan. 5 presidential election and had offered Erekle Kodua, the head of a special police department, US$100 million (EUR69.5 million) if police agreed to help oust the government, police said Wednesday.

But Patarkatsishvili said he met with Kodua on Sunday to prevent another round of violence against protesters. Oppositional leaders say that is they find the elections unfair they will protest.

The 2007 Georgian demonstrations were a series of anti-government protests in Georgia. The demonstrations peaked on November 2, 2007, when 50,000 rallied in downtown Tbilisi, capital of Georgia. People protested against the allegedly corrupt government of president Mikhail Saakashvili.

Demonstrations occurred both in September and November 2007 and were initially largely peaceful. The protests went downhill by November 6, 2007, but turned violent the next day when the police, using heavy-handed tactics, including tear gas and water cannon, unblocked Rustaveli Avenue, Tbilisi's main boulevard, dislodged the protesters from the territory adjoining to the House of Parliament, and prevented the demonstrators from resuming the protests. The government accused the Russian secret services of being involved in an attempted coup d'etat and declared a nationwide state of emergency later that day which lasted until late November 16, 2007.