By Margarita Snegireva. Hundreds of United Airlines flights were canceled on Tuesday as the airlines tried to recover from the Sunday storm that battered Chicago’s O'Hare International Airport. 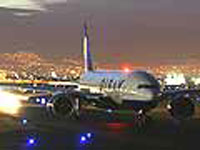 All in all, 310 United Airlines flights had been canceled by Tuesday evening, which makes 21% of its total flights scheduled globally for Christmas, Chicago Tribune reports.

The Chicago-based carrier canceled 148 flights, 10 percent of its schedule, on Monday as it struggled to recover from the fourth straight weekend in which storms have racked O'Hare.

After a storm packing wind gusts of 60 m.p.h. raked the Midwest on Sunday-one of the busiest travel days of the year-United flew planes late into the night to get holiday travelers to their destinations.
But doing so left its planes and pilots out of position when operations resumed Monday, United said.

The nation's No. 2 carrier took advantage of the light travel on Christmas, when its planes would be nearly empty, to effectively reboot its operations, canceling flights so that it could get planes back into position for the heavier travel expected Wednesday, said United spokeswoman Robin Urbanski.