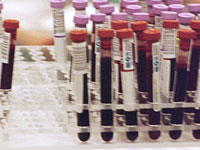 The Prime Minister greeted the patients - among hundreds seeking damages from the government and pharmaceutical companies in the blood products scandal - at a meeting in his office.

He apologized for the years of indescribable suffering they had gone through. "The only way to respond to your wishes is to enact legislation, and I'll do my utmost to achieve that goal," said Fukuda, who has struggled to regain public support following a series of scandals.

The Prime Minister and his bloc proposed a plan to submit legislation early next month to provide aid to about 1,000 hepatitis C patients. The hepatitis C sufferers have already rejected a government compensation plan according to a court-proposed settlement.

One of the hepatitis C sufferers welcomed Fukuda's apology and expressed hope for "a complete settlement."

About 200 Japanese have filed lawsuits in five courts. They  demand compensation from the government and drug makers Nihon Pharmaceutical Co., Mitsubishi Tanabe Pharma and its subsidiary Benesis Corp. The remaining patients were reportedly planning to file suits.

The plaintiffs say they contracted hepatitis C, mainly in the 1980s, from defective blood-clotting agents, which the government and the pharmaceuticals kept using despite knowledge of their potential contamination.

Though some 10,000 people may have been infected by hepatitis C through the tainted products, the aid is expected to cover only the lawsuit participants. An estimated 2 million Japanese are believed to have contracted the disease.

Hepatitis C is a blood-borne, infectious, viral disease that is caused by a hepatotropic virus called Hepatitus C virus. The infection can cause liver inflammation that is often asymptomatic, but ensuing chronic hepatitis can result later in cirrhosis of the liver and liver cancer.

The hepatitis C virus is spread by blood-to-blood contact with an infected person's blood. The symptoms can be medically managed, and a proportion of patients can be cleared of the virus by a long course of anti-viral medicines. Although early medical intervention is helpful, people with HCV infection often experience mild symptoms, and consequently do not seek treatment. An estimated 150-200 million people worldwide are infected with hepatitis C. In the U.S., those with a history of intravenous drug use, nasally inhaled drug usage, tattoos, or who have been exposed to blood via unsafe sex or social practices are increased risk for this disease. Hepatitis C is the leading cause of liver transplant in the United States.