Christmas likely to be white in US

By margarita Snegireva. Up to 10 inches of snow was predicted for Tuesday, which would make it the second straight year with snow on Christmas. 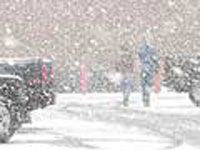 Christmas likely to be white in US

The National Weather Forecast predicted the most snow falling in the north central mountains, with up to 6 inches falling along the Front Range.

The snowfall would follow last year's 0.2 inches that fell on top of 15 inches left over from a blizzard that started Dec. 20 that paralyzed the city and closed Denver International Airport for 45 hours.

A white Christmas, to most people in the Northern Hemisphere, refers to snowy weather on Christmas Day. This phenomenon is far more common in some countries than in others. For example, in the United States, snow is seldom experienced at Christmas except in the Mid or northern parts and the mountains; but most parts of Canada except for the British Columbia coast and southern interior valleys, southern Alberta, southern Ontario and parts of the Maritimes stand an excellent chance of experiencing a white Christmas. The same goes for the countries in northern Europe, such as ones in Scandinavia, the Baltic States, northern Russia, Belarus. Due to oceanic climate and such, the further west a country is in Europe, the lower the probability that it will have a white Christmas (e.g., in southern France it is very rare, while in Bucharest, Romania, which is at a similar latitude, a white Christmas is much more likely).

Northern Italy and the mountain regions of central-south Italy may also have a White Christmas: in cities like Turin, Milan or Bologna a Christmas with falling snow or snow on the ground is not a rarity.
Trento, in example, has experienced 4 White Christmas since 1993 (1993, 1999, 2000, 2005, some freezing sleet in 2004); The city also received nearly 50 cm of snow on Christmas 1981 and a couple of cm on December 25th, 1985.

In the United Kingdom, white Christmases were more common in the 18th and 19th centuries. In modern times a Christmas is officially considered "white", especially by bookmakers, if a single snow flake is observed falling in the 24 hours of 25th December, meaning it can officially be declared a "White Christmas" with no perceivable quantity of snow. This is in contrast to other countries which usually require a specified quantity of settled snow.