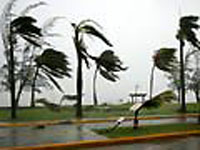 The winds hampered firefighter's efforts to douse a blaze that gutted a historic church in Hollywood, said city Fire Department spokeswoman d'Lisa Davies.
No one was injured in the fire, which destroyed the Little Country Church of Hollywood, made famous in the 1930s by a Tennessee preacher who broadcast his sermons on national radio.

Officials were investigating the cause, Los Angeles Times reports.

The Santa Ana winds are hot, dry winds that characteristically sweep through in southern California and northern Baja California in late fall and winter.

Santa Anas are a type of föhn wind, the result of air pressure buildup in the high-altitude Great Basin between the Sierra Nevada and the Rocky Mountains. This high energy wind spills out of the Great Basin and is pulled by gravity into the surrounding lowlands. The air circulates clockwise around the high pressure area bringing winds from the east and northeast to Southern California (the reverse of the westerly winds characteristic of the latitude).

As the Santa Ana winds are channeled through the mountain passes they can approach hurricane force. The combination of wind, heat, and dryness turns the chaparral into explosive fuel for the infamous wildfires for which the region is known. Wildfires fanned by Santa Ana winds burned 721,791 acres (2,921 km²) in two weeks during October 2003. These same winds have contributed to the fires that have burned some 426,000 acres as of late October 2007.