Among the regulations packed into the newest energy bill that just passed Congress this week, a ban on the incandescent light bulb will officially end what Edison started 130 years ago. “If you outlaw light bulbs, then only outlaws will have light bulbs,” says Libertarian Party Executive Director Shane Cory. 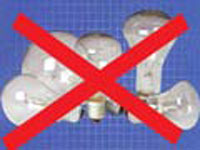 “The ban on incandescent light bulbs may seem almost comical,” says Cory, “but it raises several red flags on the level of government intrusion in people’s lives. From the toilets in your bathroom to the lights in your ceiling, there are very few consumer products free from some form of government regulation. I seriously doubt regulating light bulbs was intended to be a necessary-and-proper role of the federal government.”

The incandescent light bulb (also spelled lightbulb ) or incandescent lamp is a source of artificial light that works by incandescence. An electrical current passes through a thin filament , heating it until it produces light. The enclosing glass bulb prevents the oxygen in air from reaching the hot filament, which otherwise would be destroyed rapidly by oxidation. The operating principle of an incandescent lamp is similar to that of blackbody radiation.

Incandescent bulbs are also called electric lamps , a term originally applied to the original arc lamps. In the theater, television, and motion-picture industries, the incandescent lamps used in lighting instruments are sometimes referred to as globes, and light globe is also used widely in Australia and New Zealand to refer to incandescent lamps generally.

In addressing the question "Who invented the incandescent lamp?" historians Robert Friedel and Paul Israel list 22 inventors of incandescent lamps prior to Swan and Edison. They conclude that Edison's version was able to outstrip the others because of a combination of factors: an effective incandescent material, a higher vacuum than others were able to achieve and a high resistance lamp that made power distribution from a centralized source economically viable. Another historian, Thomas Hughes, has attributed Edison's success to the fact that he invented an entire, integrated system of electric lighting. "The lamp was a small component in his system of electric lighting, and no more critical to its effective functioning than the Edison Jumbo generator, the Edison main and feeder, and the parallel-distribution system. Other inventors with generators and incandescent lamps, and with comparable ingenuity and excellence, have long been forgotten because their creators did not preside over their introduction in a system of lighting."