Presidential candidates should be very careful with their behavior and words, because they may either benefit or be attacked by independent groups that are only now beginning to make their presence known in the early contest states of Iowa and New Hampshire . 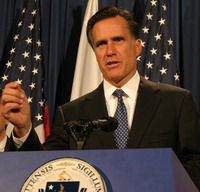 Former Massachusetts Governor Mitt Romney has been widely recognized for his leadership and accomplishments as a public servant and in private enterprise.

He has been deeply involved in community and civic affairs, serving extensively in his church and numerous charities including City Year, the Boy Scouts, and the Points of Light Foundation.

But this can not disguise his sometimes improper and inaccurate words and actions.

First of all, trying to defend one’s campaign and position, every candidate starts a hot fight. Especially Mitt Romney who has been prolific with negative mail. One piece portrays Fred Thompson as having a "do nothing record" on immigration and characterizes his other rivals - John McCain, Huckabee and Rudy Giuliani - as too lenient toward illegal immigrants.

He also had to backpedal on his hunting exploits, explaining himself again after claiming an endorsement he did not receive and saying he witnessed his father in civil rights marches he could not have seen.

The candidate tried to explain the situation after media inquiried into a statement during his recent religion speech that he watched his father, the late Gov. George Romney of Michigan, march with black civil rights leader Martin Luther King Jr.

Romney similarly backtracked after telling a national television audience Sunday on NBC's "Meet the Press" that he received the endorsement of the NRA in 2002 while running for governor of Massachusetts .

The gun rights group did not endorse either candidate, and gave a higher issues rating to his Democratic opponent.

The latter was a reference to another Romney’s statement made on "Meet the Press," in which he tried to convey his emotion after learning in 1978 his Mormon church had given full privileges to blacks.

Romney is well aware of the power of words in politics. But he hates"gotcha" journalism. That is why he blows by reporters except for scheduled news conferences, and why he is wary of a "YouTube moment" in which stray tape recorders or cell phone cameras capture him making an offhand remark.