Senator Barack Obama has caught up with Hillary Clinton’s popularity ratings. A Gallup poll conducted in New Hampshire showed that both Clinton and Obama enjoy equal support among voters. Obama has recently faced criticism from Hillary Rodham Clinton. One of her assistants suggested Barack Obama used illegal drugs as a teenager. 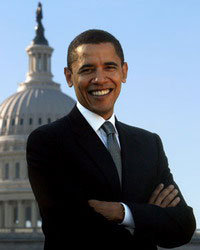 Barack Obama tried to defend his reputation in a recent short interview with The Associated Press.

"So far, I think, attempts to go negative in a way that's not policy-based have backfired on the people who have gone in that direction," Obama said Thursday during a brief interview with The Associated Press after a town hall-style meeting.

"If people are arguing about policy, that's part of politics and that's fair," said Obama, who is a U.S. senator, as is Clinton.

Obama said campaign ads focused on policy, such as his spot criticizing Clinton's universal health care plan, are fair game and he will be aggressive about making such comparisons. While not pleasant, he said he cannot fault his rivals for them.

"I would distinguish between ads that I would say maybe mischaracterize my positions but had to do with policy, versus personal attacks or attempts to go at my character or those things. In which case, I will answer them swiftly and truthfully if they're false and trust in the voters," Obama said.

The back-and-forth between Obama and Clinton has not affected his daughters, Obama said. The girls, Malia and Sasha, have appeared with their parents at some campaign events and were included in a holiday campaign commercial Obama released this week.

"Part of the reason that Michelle and I were comfortable doing this is our daughters are young enough. They're not watching the news," Obama said. "They're watching Nickelodeon. You know, they're 9 and 6. They're watching 'Hannah Montana."'

Earlier this month, Bill Shaheen, a co-chair of Clinton's New Hampshire campaign, resigned after he suggested that Obama's admitted use of illegal drugs as a teenager could be used against him if he won the Democratic presidential nomination. Clinton later denounced the comments, which she said were unauthorized, and she personally apologized to Obama.

This week, former Sen. Bob Kerrey endorsed Clinton but praised Obama's Muslim roots in a way that raised eyebrows because that detail has been part of an Internet smear campaign that falsely suggests Obama is a Muslim who wants to bring jihad to the United States. Obama is a Christian. Kerrey later apologized for any unintentional insult he may have committed.

When his daughters have seen any negative coverage, Obama said the girls go straight to him or their mother, Michelle.

"We've got a great relationship with our girls where if something bothers them, they ask us. They ask us questions about that. We don't want to stoke their fears about this stuff, but we want to make sure anything that comes up, they come and they talk to us about it," he said.

He said the family has "been able to create a space for them where they are just living their normal lives like little girls."

In New Hampshire, Clinton leads Obama 38 percent to 26 percent, according to the latest University of New Hampshire poll conducted for CNN-WMUR, a local television station. In other polls, however, they are running about even.

Obama now turns his focus to Iowa, where he is in a tight contest with Clinton and former Sen. John Edwards. This trip was his last to New Hampshire before the Iowa caucuses on Jan. 3.