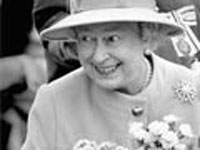 Buckingham Palace, calculating longevity down to the hour, said Elizabeth would move past Victoria at about 1700 GMT Thursday.

The queen is also within eight years of breaking Victoria's record for the longest reign. She would pass that milestone on Sept. 9, 2015.

The queen is now the fourth longest-reigning monarch. She would overtake King Henry III on March 5, and King George III in 2012.