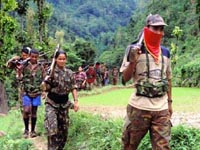 Authorities have arrested 110 suspects so far and seized 40 guns and an undisclosed number of bullets, the statement said.

Minority groups have been organizing demonstrations, strikes and transportation shutdowns in southern Nepal to demand greater recognition of their rights. Many of these smaller groups have armed members.

The protests have led to violence that has killed more than 80 people.

Home Secretary Umesh Mainali said security has improved since this month's operation began, but there was much work remaining. The government has formed a special task force to handle the efforts.

Many southerners say their region has been neglected in favor of the more populated north. They are demanding greater autonomy and more seats in the national legislature.