All seats in Kyrgyz parliament belong to Bakiyev-backed parties

By Margarita Snegireva. Kyrgyz opposition failed to win a single seat in the parliament while president Kurmanbek Bakiyev's party won the majority. 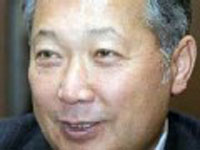 All seats in Kyrgyz parliament belong to Bakiyev-backed parties

Ak Jol party, supported by Kurmanbek Bakiyev, won 71 out of 90 seats in the parliament. The remaining 19 seats were occupied by two parties sided by Bakiyev.

Former parliament speaker Omurbek Tekebayev’s party Ata Meken finished the second but did not get any seats because of the 0.5 percent regional which it failed to overcome.

The vote results fueled fears about further unrest in the impoverished former Soviet republic, which hosts both U.S. and Russian air bases and occupies a strategic position in energy-rich central Asia .

Tekebayev accused Bakiyev's government of rigging the vote and said his party would appeal the results in court. "This is an unprecedented, blatant falsification," he told The Associated Press.

Kyrgyz politics are marked by deep regional divisions: Bakiyev is a southerner while most of his foes come from the north.

The election campaign has been more about politicians mobilizing support in their home regions rather than candidates trying to win nationwide support by offering attractive economic and political platforms.

Under election code changes introduced in October, a party needed to clear two barriers to win seats in parliament: it would have to get 5 percent of the nationwide vote and 0.5 percent of the vote in each of the country's regions.

Critics have said the second regional hurdle that was introduced in October, along with other election code changes, was designed as a mechanism to oust opposition politicians from the legislature.

Two days after the vote, Kyrgyzstan's Supreme Court voted to change the legal provisions referring to vote count, but officials said that the 0.5 percent regional threshold has remained in place.

Two smaller parties - the social democrats and the communists - won 11 and 8 seats respectively. Both have sided with Bakiyev on key issues.

Opposition groups accused the government of plotting to rig the vote to purge parliament of Bakiyev's political rivals. They threatened to hold mass protests if there were any signs of meddling.

The nation of 5 million has since been in continuous political turmoil, with Bakiyev clashing with defiant lawmakers over the extent of his powers and government appointments and frequent street protests.

Security has also been on the decline; in the southern, most-populous regions, radical Islamic groups have gained followings since the 1991 Soviet collapse.

Kyrgyzstan had long been considered the most liberal among Central Asia 's five predominantly Muslim nations, but Bakiyev has faced criticism for attempts to tighten control.