USA to renew and replenish its army

George W. Bush’s administration is going to increase the U.S. army’s power and strength. The size of the army will be enlarged thanks to two new combat brigades sent to U.S. bases in Texas , Georgia and Colorado in the coming years. 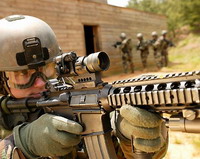 USA to renew and replenish its army

The 2010 plan means that the army will grow by 74,000 soldiers, as six new brigade combat teams and eight support units will be added around the country. USA also plans to delay moving two brigades out of Germany until 2012-2013. This decision is based on requests from commanders in Europe to maintain troop levels there, as well as the need to ensure that troops returning to the U.S. had proper housing and other facilities at their new base

There exist several army installations that will definitely face a new arrival, but this tendency will engulf the whole country – the number of soldiers ranking from a few to thousands.

Gen. Richard Cody, the Army vice chief of staff, highlighted that it’s very important to give the forces a quality of life that is equal to their quality of service to the nation.

Cody also recalled that as the size of the Army grows, the Pentagon will eventually be able to shorten deployment times from the current 15 months back to 12 months.

The planned enrichment of army ranks will impact 304 Army installations, including 380,000 soldiers and family members. It is presumed to construct 69,000 barracks spaces, 4,100 family housing units and 66 child centers.

The increase may help to relieve the strain on forces already stretched by the wars in Iraq and Afghanistan . It’s especially convenient to fulfil the plan in such short terms – three years.