Democrat John Edwards is hunting for a winning formula in next month's New Hampshire primary. 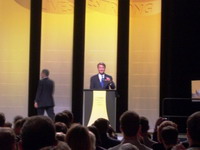 He is also suggesting he is the candidate whose message comes from the heart.

Fighting hard in a three-way race in Iowa, Edwards also is looking ahead to New Hampshire, which holds America's first primary on Jan. 8, five days after the Iowa caucuses. He is in third place in New Hampshire, but with six appearances here over two days, starting Tuesday, a 24-hour blitz planned after Christmas, a new ad and slightly increased staffing, Edwards hopes he can position himself well enough to make a big push after Iowa.

Singer-songwriters Bonnie Raitt and Jackson Browne are traveling with him for the two days, reprising their help of last month in Iowa, and they kicked things off with a performance before the jammed Lebanon Opera House here, the first of five events. Edwards' wife, Elizabeth, and daughter, Cate, also appeared with him. Edwards heads back to Iowa on Thursday.

"We don't lend our endorsement lightly. We are here for a reason," Raitt said. "We got to get this guy elected so we can have real change and not just lip service."

The candidates are using every tool they can in the homestretch leading up to the primary race's early and crucial voting, and celebrities are being called to all sides. They have included TV queen Oprah Winfrey making high-profile appearances for Barack Obama, and actor Chuck Norris accompanying Mike Huckabee.

Edwards has employed celebrities more than most. He also had actors Kevin Bacon and Tim Robbins with him in Iowa last week.

He has seen an uptick in his New Hampshire poll standings. However, he still trails well behind rivals Hillary Rodham Clinton and Obama. Relying on public financing, he has much less to spend than Clinton and Obama and smaller organizations in the key states.

He put up a new populist-themed ad in New Hampshire on Monday, hoping it would appeal to this state's independent voters, who can vote in either primary.

"Corporate power and corporate greed have literally taken over the government," Edwards told the crowd on Tuesday. "We're going to have to be willing to stand up to these people. It's going to take a fight."

One woman in the audience asked Edwards why she should pick him.

He replied, "You have to decide: Does it sound like we're saying something we figured out we were supposed to say, that's careful and calculating? ... You can tell the difference. You don't need me to tell you that."

Browne and Raitt are co-founders of Musicians United For Safe Energy, a group that works against the spread of nuclear power. Edwards opposes the construction of more nuclear power plants.

Browne has given money to Obama, but said he's changed his mind since Edwards made his nuclear position clear.

"I like Obama, I like Obama very much," Browne said after the performance. "I would rather see Edwards president, to tell you the truth."

World
Henry Kissinger: There are three possible outcomes of the Ukraine crisis