Opening of dam during Tropical Storm Olga under investigation

Investigators try to find out the reason of dam opening during Tropical Storm Olga that flooded a highly populated river basin, killing at least 30 people. 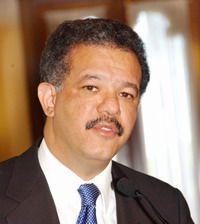 Opening of dam during Tropical Storm Olga under investigation

A committee charged with overseeing dams in emergencies ordered the floodgates opened on Tavera Dam shortly before midnight Dec. 11, giving local authorities in the central province of Santiago less than an hour to warn residents that a devastating wall of water was on its way.

The incident has become political fodder for the Caribbean country's main opposition parties five months before polls open in a closely contested presidential election. Fernandez is seeking a third term in office.

"There are 33 people dead because of an irresponsible decision," Andres Matos, a spokesman for the opposition Dominican Revolutionary Party, told The Associated Press by phone.

The Dominican president said it was unacceptable for the country to have "30 or 40 deaths every time we are affected by a natural phenomenon," according to his press office.

Octavio Rodriguez, a member of the committee, told The Associated Press at the time that officials ordered the floodgates opened because they feared the primarily earthen dam would collapse under the strain of heavy rains, threatening the country's second largest city.

But Orlando Franco, a senior engineering professor at Santiago's Pontifical University, said authorities released an unnecessarily large amount of water and failed to have an effective alarm system in place.

Flooding from the dam caused the vast majority of the 36 deaths recorded across the Caribbean after the rare December tropical storm. Two people were killed in Haiti and one died in a Puerto Rico mudslide.

Olga caused widespread agricultural damage and forced tens of thousands from their homes in the Caribbean nation of some 9.4 million people. The deluge came less than a month Tropical Storm Noel ravaged dozens of other Dominican communities and claimed 87 lives.