Naughty woman wants rather Santa Claus than his presents

A woman who sat on Santa Claus lap turned out to be naughty, not nice. 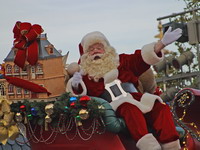 Naughty woman wants rather Santa Claus than his presents

According to Santa at the Danbury Fair mall in the U.S. state of Connecticut, he was groped.

Sandrama Lamy, 33, was charged with sexual assault and breach of peace after allegedly taking liberties with Santa over the weekend. She was released on a promise to appear in court on Jan. 3.

Police quickly found and identified Lamy because the woman was described as being on crutches, said police Capt. Bob Myles.

A call seeking comment from Lamy was answered by a recording Tuesday morning. A woman later called back and said: "It's a false report and I don't have any idea."

Police did not give the name of the disconcerted Santa, but they said he is 65 and felt badly because children were waiting to see him. "He was apparently shocked and embarrassed by the whole incident," Myles said.

A man who teaches hundreds of prospective Santas a year - "Santa Tim" Connaghan, president of RealSantas.com - said he has never heard of a similar incident, though it is not unusual for adults to want to pose with Santa.

"I've had some very nice ladies sit on my lap," said Connaghan, who did not train the Danbury Fair Santa. "Once in a while they'll say 'I hope Mrs. Claus isn't going to be upset.' You have to be discreet and kind and say 'Oh no, she'll be OK. You can sit here, but only for one photo."