Tuesday there was made an inspection of two defective mechanisms that are hobbling power generation at the orbiting complex. 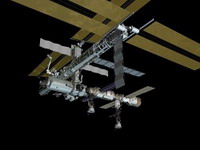 Engineers started filling the spaceship's external tank with liquid hydrogen fuel at daybreak, in a test at the launch pad to pinpoint the nagging trouble. One of the four fuel gauges promptly failed, and two others were not working consistently.

The problem could be anywhere in the 100 feet (30 meters) of circuitry between the shuttle and tank, or in the fuel gauges.

Atlantis' astronauts were supposed to examine the clogged rotary joint at the international space station. But with the shuttle mission delayed until January, NASA moved up the joint inspection and added another chore to the spacewalk after a second component in the space station's power system failed 1 1/2 weeks ago.

Commander Peggy Whitson and Daniel Tani made history as they floated outside well before dawn: It was the 100th spacewalk at the space station.

They quickly headed to a mechanism that is supposed to tilt the solar wings on the right side of the space station toward the sun. The component experienced circuit breaker trips Dec. 8, leading engineers to believe it may have been hit by a piece of space junk or micrometeorite.

However, Whitson and Tani found no signs of impact.

Afterward, the spacewalkers moved over to the bigger solar rotary joint, which is supposed to automatically revolve 360 degrees to keep the solar wings pointed toward the sun. The joint - also on the right side of the space station - has been used sparingly in the past three months because of vibrations and electrical current spikes.

During a spacewalk in October, Tani found steel grit inside the 10-foot-diameter (3 meter) joint. He collected samples of the shavings, which were returned to Earth on the last shuttle flight, but engineers still do not know what is grinding inside.

Whitson and Tani looked deeper into the joint during Tuesday's seven-hour spacewalk, taking off more covers and using a dentist-style mirror on a rod to peek inside. They collected more samples, using tape to pick up the grit, and removed a suspect bearing for analysis back on Earth. No repairs were planned during the excursion.

Despite the seriousness of the job, the spacewalkers enjoyed some laughs with Mission Control. One flight controller, a man, wanted to know from Whitson "if this beats cooking and sewing."

"Tell him I'm going to take care of him when I get back - maybe not the way he wants," replied Whitson, the space station's first female skipper.

Three hours later, she became the new female spacewalking champion - "the queen," according to Mission Control - racking up more time outside in the vacuum of space than any other woman. By the time she went back in, her combined spacewalk tally was 32 hours.

The unrelated predicaments are curtailing power generation at the space station and could delay future shuttle visits.

Atlantis' trip to deliver the European lab, Columbus, is off until Jan. 10, a date that hinges on the results of Tuesday's fueling test. The Japanese lab, Kibo, or Hope, is supposed to follow on multiple shuttle flights.

NASA has been struggling with sporadic fuel gauge problems for two years and wants to resolve them once and for all. The gauges are part of a backup safety system; they prevent the shuttle's main engines from running on an empty tank, which could be catastrophic.