Senator Hillary Rodham Clinton and her husband visited a local Supermarket in Iowa on Tuesday while a pack of Secret Service agents fanned out around the couple. 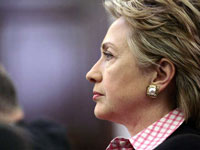 "I've been to cattle barns before and sales before, in Arkansas, but I've never felt like I was the one that was being bid on," Clinton told a crowd in western Iowa. "I know you're going to inspect me. You can look inside my mouth if you want. I hope by the end of my time with you I can make the case for my candidacy and to ask you to consider caucusing for me."

Political scientist claim that the endorsement in Sunday's Des Moines Register gave a huge lift to the Clinton team as it fights to stem the surging momentum of her lead rival, Illinois Sen. Barack Obama. Clinton, Obama and former North Carolina senator John Edwards rival in Iowa with Obama leading slightly in some surveys. Meanwhile, Clinton's once formidable lead in other early state polls like New Hampshire and South Carolina has also appeared to vanish.

Senator Clinton and her surrogates and supporters were fanning out across Iowa to host events in the state's 99 counties during the last full week before the campaigns pause to observe Christmas.

The rivalry in rural Iowa is the first crucial contest in political parties' state-by-state process of selecting presidential nominees. The candidates who do well in the caucuses, and in the New Hampshire primary five days later, can gain momentum and media attention, establishing themselves as front-runners. Those who do poorly often drop out of the race.

Mrs. Clinton is flying on her "Hilli-copter" to reach as many geographic regions of the state as possible.

The former Nebraska senator and governor Bob Kerrey endorses Hillary Clinton "enthusiastically and unequivocally. Though he ran briefly for the Democratic nomination in 1992 against Bill Clinton.

"She inspires my confidence. The question is, does she inspire your confidence?" Kerrey asked.

Clinton also unveiled a retooled stump speech Sunday that stressed her record of working for change in public policy throughout her career as a lawyer and later as first lady and a senator.

With polls showing most Democratic voters eager for a new direction in Washington, Clinton, with her long record in public life, has been forced to battle the perception that Obama would be the more effective change agent.

"We are ready for a new beginning," she told an audience in Council Bluffs. "It all comes down to one question: who is ready and able to make the changes we need on Day One in the White House."

Senator Clinton also compared her health care plan with Obama's, without mentioning him by name. Her campaign has criticized the Illinois senator for offering a health coverage proposal that would not require everyone to carry health insurance; Obama has said coverage cannot be mandated until health care costs are substantially reduced.

"Who would I leave out? Who would get to decide?" Clinton asked.

She also made a more explicit appeal to women voters, whom her campaign was counting on to come out in large numbers for the former first lady.

"Countries that deny women their rights are often countries we have problems with, aren't they?" she said. "When I am president I will continue to make changes that are good and right for women and are also smart for national security."