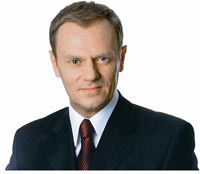 Poland’s president was formally asked to improve the country's withdrawal from Iraq by Oct. 31, 2008 on Tuesday.

The issue was a bone of contention for the President Lech Kaczynski and Prime Minister Donald Tusk.

Poland has 900 troops in Iraq.

The mission’s current mandate expires on Dec. 31. Tusk wants to withdraw next year while the president advocates staying in Iraq longer, the AP reports.

Premier’s Cabinet sent a motion to Kaczynski, who is also the military's commander in chief and a staunch U.S. ally, asking him to extend the mission only until Oct. 31, 2008 , a government statement said.

Presidential aides previously have signaled that Kaczynski might withhold approval of a plan that limits the mission to that date, but both sides have made clear they are open to discussion.

Aide Michal Kaminski said Kaczynski wanted to hold talks on the issue with Tusk. It was not immediately clear when the two might meet or when Kaczynski might make a final decision.