Fidel Castro: 'I will be with you, as long as I can be useful'

Ailing leader Fidel Castro said in his letter read on state TV that he does not intend to rule forever and he will not raise difficulties in the way of young generation, but he provided an example of Brazilian architect who is still working at the age of 100. 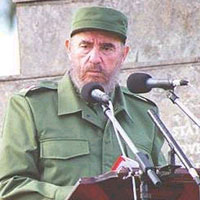 Fidel Castro: 'I will be with you, as long as I can be useful'

"My elemental duty is not to cling to positions, or even less to obstruct the path of younger people, but to share experiences and ideas whose modest worth comes from the exceptional era in which I lived," Castro wrote in the final paragraph of a lengthy letter discussing the Bali summit on global warming.

Castro's thoughts about power and making way for younger leaders were similar to past comments, including those before he fell ill, the AP reports.

The 81-year-old Castro has not said when - or even if - he will permanently step aside after temporarily ceding his powers to his younger brother Raul 16 months ago. He has not been seen in public since he made that announcement in July 2006 after undergoing emergency intestinal surgery.

But officially Castro remains the president of Cuba's Council of State, making him the country's head of government. Several times a week he pens essays, many of them on international issues that are carried on state media.

"I think like (Oscar) Niemeyer that you have to be of consequence up to the end," Castro wrote in Monday's essay, referring to the Brazilian architect who was honored around the world as he turned 100 on Saturday.

Niemeyer helped design the U.N. headquarters and the main buildings of Brazil's capital, winning in 1988 the Pritzker Architecture Prize - dubbed the Nobel of architecture.

In an essay over the weekend, Castro paid homage to Niemeyer, a lifelong communist who was exiled for several years during Brazil's 1964-85 military dictatorship.

Despite his physical absence from public life, Castro currently is a candidate for re-election as a deputy to the National Assembly, or parliament, during Jan. 20 national elections.

Within weeks after that balloting, the newly formed parliament is expected to select a new Council of State and its president, but there has been no official word on Castro's role.

Cuba's unchallenged leader since 1959, Castro has held the council presidency since its 1976 creation.

When the parliament re-elected Castro to his sixth term as Council of State president in March 2003, Castro said he would stay power only as long as he felt he was contributing.

"I promise that I will be with you, if you so wish, for as long as I feel that I can be useful - and if it is not decided by nature before - not a minute less and not a second more ... Now I understand that it was not my destiny to rest at the end of my life."