At an airport security check a man prefered to quaf a liter (two pints) of vodka that caused alcohol poisoning instead of handing it over to comply with new carryon rules. 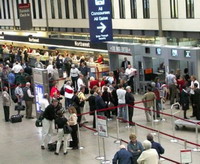 The incident occurred at the Nuremberg airport on Tuesday, where the 64-year-old man was switching planes on his way home to Dresden from a holiday in Egypt.

New airport rules prohibit passengers from carrying larger quantities of liquid onto planes, and he was told at a security check he would have to either throw out the bottle of vodka or pay a fee to have his carryon bag checked as cargo.

Instead, he chugged the bottle down - and was quickly unable to stand or otherwise function, police said.

A doctor called to the scene determined he had possibly life-threatening alcohol poisoning, and he was sent to a Nuremberg clinic for treatment.

The man, whose name was not released, is expected to be able to complete his journey home in a few days.